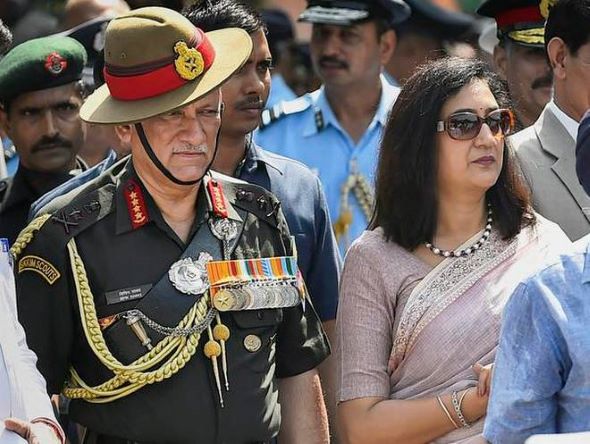 Chennai, December 8 (The Hindu): The tragic helicopter crash in the Nilgris in Tamil Nadu in which the Chief of Indian Defense Staff Gen.Bipin Rawat, his wife Madhulika and 11 others died on December 8, is another addition to the long list of fatal accidents involving VVIPs. The weather forecast for the hilly area had indicated low clouds, high humidity and light rain.

Images indicate that the helicopter had struck trees and crashed? Was the pilot pressurized to proceed?

People have forgotten September 2, 2009, when the helicopter carrying the CM of Andhra Pradesh, Y.S. Rajasekhara Reddy, crashed into the hills near Kurnool. The weather was bad, yet the pilot was pressurized to proceed. The investigation report and the subsequent CBI report were all a cove-up. This trend continues in all accident investigations and lessons are not learned.

September 30, 2001, Madhavrao Scindia, a former Civil Aviation minister, insisted on proceeding to Kanpur in bad weather for a meeting. The aircraft crashed and all on board died. On March 3rd 2002, the Speaker of Lok Sabha Balayogi died when the helicopter he was travelling in crashed in heavy rain.

April 2011: the helicopter carrying Chief Minister Khandu crashed in Tawang, in inclement weather. The political class may claim they never pressurize and investigation reports will never include any adverse comments in the report.

This malaise is not confined only to India. In April 2010, Lech Kacyński, the President of Poland, died in the TU 154 crash in Smolensk, Russia. He had pressed the pilots to land in spite of the weather being extremely poor.

The crash near Coonoor indicates the helicopter was flying low, maybe to keep terrain in sight. They have struck trees and crashed. People forget the visual illusions that plagues aviation in poor visibility or rain conditions. The compulsion to duck down below clouds, to keep terrain in sight, has often resulted in fatal accidents. They will institute a court of Inquiry but will it come out with transparent facts in there was a compulsion to proceed with the flight in spite of inclement weather?

The MI-17 has very powerful engines and the downwash can be quite strong. If he had been flying low to keep the terrain in sight, there is every likelihood of the downwash swirling the trees, creating visual illusions. Even very experienced pilots get foxed in such conditions. The helicopter is fitted with modern avionics. However, when you are looking for a landing spot in poor visibility and low clouds, the question arises if both pilots had their eyes outside or was one monitoring the Flight display. The images of big tree trunks broken indicate that the rotors have impacted. Once airspeed is lost at low altitudes, it is very difficult to recover, especially in high terrain area. The helicopter is fitted with a Full Authority Digital Electronic Control (FADEC) for the engines. Even if the pilots try to get maximum thrust for the engines, FADEC will prevent over boosting. Only the final investigation report can identify those. Being a military helicopter and in-house investigation by military authority, we may never learn the whole story.

Investigations of civil aviation flights are doctored and over time things get forgotten. The top officer of Armed Forces has perished and let us hope the military is more forthcoming. It is important for VVIPs to understand that the decision to continue the flight is best left to the professional manning the cockpit, whether civil or military. This is another case of a controlled flight into terrain (CFIT) which is an avoidable event if judgement doesn’t get clouded by pressure.